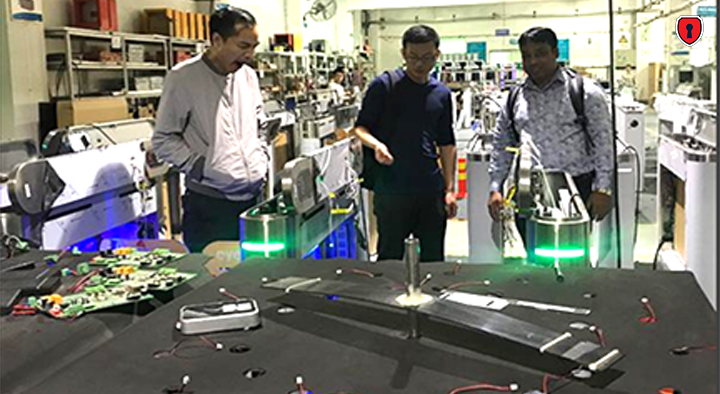 Design
Lock comes in grades, from low-security to high-security. A low-security lock is
generally made from cheaper materials, and its parts can be mass-produced. A
company that manufactures low-security locks may have two or three available
models and keep in stock the parts needed to customize them. Beyond low-security,
the lock manufacturer is generally what is called an original equipment
manufacturer, meaning that they make the parts for their locks as well as the final
products. This kind of manufacturer may keep only the most basic and common
parts in stock, and most of its orders require custom design. The process begins with
the manufacturer assessing the customer’s specifications. The customer orders a
lock to fit a certain size door for example and asks that the locks can be opened with
a master key. The lock manufacturer then comes up with the best design for that
customer’s needs. In some cases, a customer may have purchased locks in the past
from one company, and now wants more identical locks from a different
manufacturer, who promises to make them more economically. Then, the lock
manufacturer examines the customer’s original locks and goes through what is
known as a reverse engineering process.

The manufacturer’s design team figures out from the existing lock how to make their product match it. the customer’s first lock company has patented aspects of its lock construction.
The second manufacturer may not duplicate it without infringing the other company’s
patents. So, the designers “design around” the first company’s product, producing a
lock that will match the customer’s originals and serve the same purpose but using
different mechanisms. Medium and high-security locks in most cases go through this
design stage, making the production of locks a time-consuming process. A reputable
manufacturer making anything but low-security locks may take from eight to 12
weeks to produce locks for an order, from the time the specifications are given to
when the locks are packed and shipped.

The key
For the standard five-tumbler key lock, the key is made first. The lock manufacturer
buys key blanks and cuts the ridges, or combinations, in each key. Each key has five
bumps on it that are cut to different levels. These levels are designated by numbers.
The low cut is one, next up is two, then three. In many cases, there are only four levels,
though some manufacturers may use as many as seven. A five-tumbler key lock with
four levels in the key yields four to the fifth power, or 1024, different possible
combinations of ridges in the key. The five ridges are listed by the height of each
level, yielding what is called the combination for the key. A key with the combination
12341 is cut with the first ridge at level one, the second at two, the next at three,
and so on. The lock manufacturer chooses the combinations from a random list and
cuts each key differently.

Internal mechanisms
The internal mechanisms are made next. These have been designed to fit this
particular lock order, and the machinery that makes them may have to be re-tooled
or reset. Because the tiny interior parts, specifically the pins, must be manufactured
to exceedingly fine tolerances, the machinists may make a trial run before starting a
big job. Then the machines may be re-set if necessary. The machining of small brass
parts take many steps. They may be cast, then grooved, ridged, jeweled, and
polished. Precision tools handle these jobs, cutting the metal to within tolerances of
plus or minus 0.001 of an inch.

Other parts
The manufacturer also makes the other parts of the lock. The cylinder, or plug, that
the key fits into, guard plates, washers, the bolt or cam, and the casing, are all made
according to design specifications, by die-casting and then further machining. The
number of parts varies with the design of the lock, but even a small and relatively
simple lock may have thirty separate parts, and some of these parts require multiple
toolings. The process of making the lock components can take several weeks.

Assembly
When all the parts are ready, the locks are assembled by hand. Lock workers sit at
well-lit tables with a kit of the pieces of the lock in a bin and the key on a stand in
front of them. An experienced worker can tell the combination of the key just by
looking at it. The worker first fills the plug, or cylinder, of the lock with the pins that
correspond to the combination of the key. The worker inserts a tiny spring and then
the lock pin, using a small tool called an assembly to pick to hold the small parts. The
assembly pick has a small screwdriver on one end and a point on the other, and the
worker uses it to prod the delicate parts to where they belong. Once the
Cross-section of a typical lock.
The plug is filled according to the key combination, the worker snaps or screws together with
the other parts around the lock. Though it is skilled work, it takes no special training,
and these workers are not locksmiths.

Final steps
Once a lock is fully assembled, the worker checks it with the key to make sure it
works. It may pass to a quality control station at this point, and then be dusted or
polished. Workers package the completed locks and box them for shipment.

Quality Control
The most important aspect of quality control in lock manufacturing is ensuring that
the tiny machined parts are the exact sizes specified. For new custom orders, the
machinists usually produce trial samples of the parts, and each one of these may be
inspected and measured manually, using precise gauges. If all seems to be going
well, the machinists will run the rest of the order, and then perhaps one of every 500
or 1,000 parts are checked. After the worker assembles the lock, he or she tests it with
the key to make sure it works properly. A quality control specialist may also spot-check the locks at this stage.