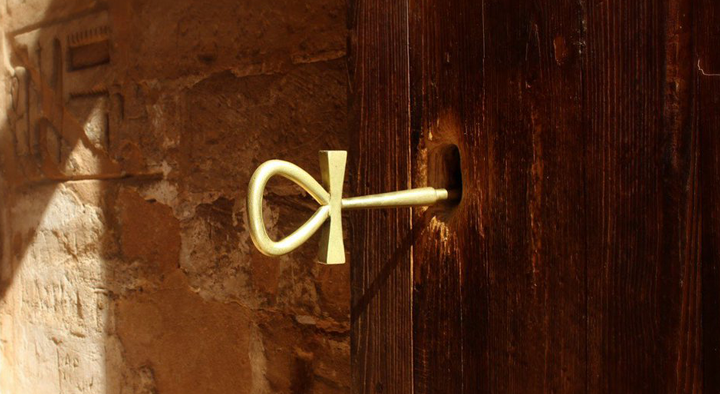 Locks have been used to fasten doors against thieves since the earliest times. The Old
Testament contains several references to locks, and the first archaeological evidence of
locks is about 4,000 years old. These are Egyptian locks depicted in the pyramids. These
earliest locks were of a type known as pin tumbler, and they are actually not very different
from common door locks in use today. The Egyptian lock consisted of heavy wooden
housing mounted to the door. A wooden bolt passed through the lock and was held in place
by iron pins which dropped into slots and held it firm. The key was a straight piece of wood
with pegs projecting up from its end. When the key was inserted and pushed upwards, the
pegs on the key lifted the pins in the lock, and the bolt was freed.
The Greeks developed a simple door lock by about 700 B.C. This used a latchstring to pull a
bolt through brackets in the door. By pulling the string, the homeowner could lock the door
from the outside. Then, the string was string back through the keyhole. The key itself was a
sickle-shaped piece of metal from two to three feet long. The key could be fitted into the
hole in the lock to pull back the bolt from the outside. The major drawback to this lock was
that anyone with a curved stick or their own key could open it. And, the large metal key was
cumbersome.
Romans adopted the Greek lock system, but solved the problem of the heavy key by
chaining it to a slave, and then chaining the slave to the doorpost. Eventually, Romans
developed a new kind of lock, called the warded lock. In the warded lock, notches and
grooves called wards were cut into the keyhole, and the key was cut with corresponding
notches and grooves. Only the proper key could fit into the keyhole, and then its tip
engaged the bolt and withdrew it. The warded lock was much smaller than its predecessor,
and keys were small enough that no slave was needed to take care of it. But because the
classic Roman toga had no pockets, the key still wasn’t easy to carry, and so it was usually
attached to a finger-ring. Warded locks were widespread in Europe by the thirteenth
century and remained in use well into the eighteenth century. They persisted in spite of the
fact that they were easy to pick, and were barely an obstacle to determined thieves.
The Romans also used padlocks, in which a key turned a bolt releasing a spring on a shackle.
These were used for locking trunks. Similar locks were invented in China, India, and Russia
during the same era. The Chinese also invented the combination lock. It had moveable rings
inscribed with numbers or letters, and its hasp was released only when the rings were
aligned in the proper sequence of symbols. Combination locks found their way to Europe
and were used in the middle Ages especially on couriers’ dispatch boxes.
European locksmiths in the middle Ages made beautiful, intricate locks that took
appallingly long hours of work to build and offered little real security. Locksmiths
apprenticed for 10 years to reach the journeyman level. To reach the rank of master, the
locksmith had to complete a masterpiece lock for approval by his guild. These masterpieces
took thousands of hours to complete, and the results were generally much more decorative
than functional. Locks that offered improved protection against theft were not developed
until the late eighteenth century, when an English locksmith, Robert Barron, patented what
was known as the double-action lever-tumbler lock in 1788.

Barron’s lock had two interior levers held by a spring. These levers, or tumblers, had notches
that hooked over the bolt and held it shut. The key also had notches on it corresponding to
When the right key was inserted, it would lift both tumblers, and the bolt could be drawn.
the notches on the levers. Other inventors added many more tumblers to this design, and it
proved much more difficult to pick than the earlier warded locks.
Linus Yale Jr., an American locksmith born in 1821, made a significant improvement in lock
design in 1861 with his invention of the modern pin-tumbler lock. The design principle was
similar to the Egyptian lock. This lock has a rotating cylinder which is held fast in the bolt by
a series of five spring-driven pins of different heights. The key has five notches on it that
correspond to the heights of the five pins. When the correct key is inserted, the pins line up
a level, and the cylinder can be turned to disengage the bolt. If the wrong key is inserted, the
pins catch. Picking a Yale lock proved extremely difficult, and the parts for the lock could be
inexpensively mass-produced by machine. Within several years of its invention, the Yale lock
became the standard, replacing virtually all earlier lock technology.
Even more sophisticated locks were developed in the twentieth century, including timer
locks used in bank vaults, push button locks, and electronic locks that operate with a credit
card-like key. The manufacturing process that follows is for a standard pin-tumbler lock. This
is the kind of lock that may be found on any front door or file cabinet drawer.
Raw Materials
Standard five-Tumbler key locks are made of various strong metals. The internal
mechanisms of locks are generally made of brass or die-cast zinc. The cam, which is the
tongue that protrudes from the lock to secure it, is usually made of steel or stainless steel.
The outer casing of a lock may be made of brass, chrome, steel, nickel, or any other durable
metal or alloy.